2022 has been one for the history books.

Through Q3 of 2022, investors in the ubiquitous buy-and-hold cookie-cutter portfolio of 60% stocks and 40% bonds have lost roughly 20% as stocks and bonds dropped simultaneously. Investors in riskier corners of the market are down much more than that. Fortunately, we don’t run cookie-cutter portfolios and we try and pivot as the market speaks. Investing is as much about risk management as it is about returns. As my grandfather used to say, "sometimes the return of your money is more important than the return on your money."

For our part, we have been publicly encouraging caution all year. We said in February of 2022 with the S&P 500 some 1000 points higher than the end of September, “This is not an environment to take excessive risk.” We observed that we might not see the stock market bottom until around the mid-terms. As we approach said elections, we thought you might appreciate an update on the economy and the markets.

Until now inflation has been the root cause of the poor returns in stocks and bonds in 2022. But as 2023 nears we believe the market will be focused instead on a recession. As we said in May of this year “the Fed wants to slow inflation, but to do so it must slow the economy… the Fed is playing a game of Chicken with the markets.” In September, the markets swerved first as the S&P 500 fell 9.5% and the Vanguard Total Bond Market Index lost 3.66%.

Alcohol is not the solution

A friend recently joked by asking if I’d taken up drinking. The joke was timely. The brilliant economist Milton Friedman used to compare inflation to alcoholism.

After trillions of dollars in stimulus spending over the last two years, central bankers are trying to sober up, and those bad effects Milton Freidman referenced are displayed across the front page of the Wall Street Journal. The US dollar (USD) is at a 20-year high, making a bad situation even worse for the Europeans who depend heavily on imports. According to Eurostat, producer prices in Europe for the month of August are up a staggering 43.3% year over year. Moreover, the UK seems particularly susceptible to higher interest rates as their mortgages are typically only fixed for 2-5 years – after which they become variable7 - Yikes! The silver lining to the strengthening USD is that it is a great time for Americans to book a European vacation – it's all on sale! But there are two sides to every coin, even silver dollars. The strong dollar makes our goods and services more expensive to our trade partners, making other options more attractive. This slows our economy by decreasing exports.

Back at home the US consumer is feeling the pinch from inflation and looking to trade down to less expensive goods. Some stores are having to offer big discounts to move a glut of inventory, creating an environment that may benefit off price retailers, low priced retailers, and pawn shops.14 To keep up with inflation, consumers are carrying more and more credit card debt, for which we expect to see an increased risk of defaults.16 Another wave of defaults in car loans threatens to damage some banks and auto dealers who let consumers borrow more than their cars were worth during the inventory shortages of the pandemic.17 Perhaps this is what led the CEO of JPMorgan to warn that there is a 20-30% chance of “something worse” than a recession on the horizon.6

I was on paternity leave during the third quarter’s Jackson Hole summit, but I still listened closely to Fed Chair Jerome Powell’s speech. He warned investors that “some pain” might be ahead as the Fed fights inflation.11 This begs the question: how much pain? While Steph and I were in the hospital they had the smiley faced pain chart that ranges from a smiling 0 to a crying 10. I wondered where the chairman thought we were headed on a scale of 0-10.

How much pain will we experience and for how long? Will it all end in tears at a 10? As always we turned to history for our answer.

According to the Man Group, past inflation shocks have led to returns in stocks and bonds that were well below their historical norms.15 Over the prior eight episodes in the United States, only half saw positive returns for stocks - with an average return of 0%. Meanwhile, returns on bonds were predictably poor during times of high inflation. Over the previous inflation shocks bond returns averaged 3% - a little more than half their historical norms of 5%.

According to Hedgeye, five of the last six inflation shocks since WWII ended in a recession. Typically these episodes lasted four years: about two years of inflation and about two years of stagflation or disinflation. For your reference, we believe inflation may have peaked in June of 2022. It seems to us that we are not out of the woods just yet. The Fed, it seems, is turning it up to 11.10 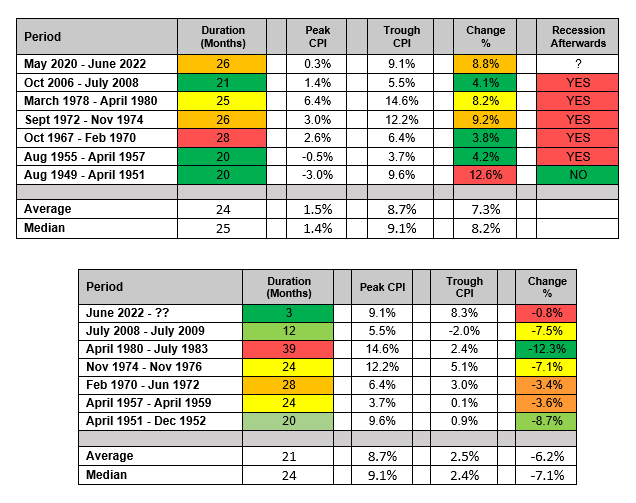 As I told the news recently, this is one of the worst setups I have seen in my career. However, no market goes straight up or straight down. And while it is important to remember that no one knows the future, we do see some good reason for optimism in the short-term. In fact, the stage may be set for another bear market rally thanks to the three S’s: Seasonality, Sentiment, and September.

As we mentioned at the outset of the year, midterm years are often difficult for the stock market. Perhaps presidents know they are not on the ballot, so they frontload slower growth policies earlier in their term. Maybe the market prefers gridlock to single-party control. Practically speaking the reason does not matter as much as the fact. Since 1962 the president’s party has averaged a loss of 23 seats in the House and three seats in the Senate and the difference between the S&P 500’s price performance before and after is stark. Stocks outperformed the previous 12 months over the next 12 months in 11 of the 15 midterm years we studied by an average of 16%. Furthermore, this anomaly is not present in years without a midterm.

At the end of September, individual investors were overwhelmingly pessimistic about stocks. According to AAII for the first time in their survey’s 35-year history, we saw back-to-back weekly surveys of over 60% bears. In the past we have seen better-than-average returns in stocks after similar observations. While this is no guarantee of future profits, it is encouraging.

Source: DJWM. Note: Returns less than 1 year are not annualized.

Another sign of panic is in the VIX curve. This has been a good indicator of oversold conditions throughout the bear market of 2022. Readers will note the VIX curve today looks more like it did at the June lows than it did at peaks in stocks such as on December 31st and August 16th. 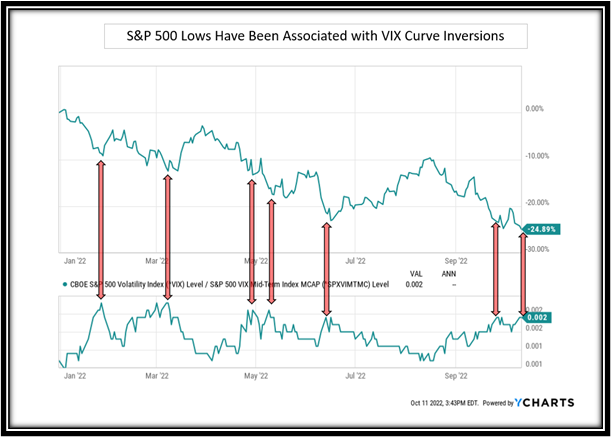 September clobbered stock and bond investors. But, according to Dow Jones Market Data, that might be a good thing for October. The average return in the Nasdaq in October after a September decline of 9% or more was quite strong compared to its returns in all Octobers.5 Note that you cannot invest directly in an index.

While we would not be surprised at all to see the market move higher in the short-term, our experience tells us caution is still prudent in the longer term.

Inflation remains too high, and the Fed is in a catch-22. If they pause their rate hikes then inflation could get out of hand. If they continue it will increase the odds of a recession – or something worse. The cynic wonders if that isn’t their goal. Recessions generally lower interest rates, and the Fed is certainly aware that higher interest rates will hurt both consumer and government spending. According to CBO’s projections, the cost of servicing the US debt could become the largest federal “program” over the next few decades — surpassing defense spending in 2029, Medicare in 2046, and Social Security in 2049.9

The yield curve is still inverted. This is a classic recession indicator we have written about before. The yield curve has re-steepened before 4 of the last 4 recessions officially began – let alone ended! 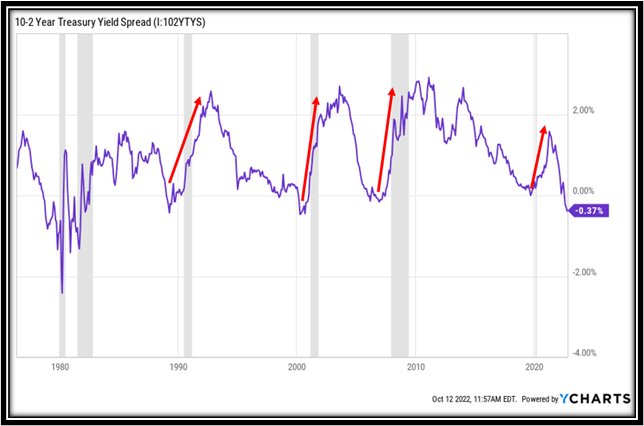 Another sign that the bear market is not over is the employment data. Typically employment is a lagging indicator. Companies are understandably slow to fire people and slow to re-hire them. In Q3, large companies such as Amazon and Apple announced hiring freezes, but layoffs have not yet begun.2, 3, 12 The unemployment rate sits at just 3.5%. If we are headed for a recession, and we think we are, things could get worse before they get better.

And, of course, we have not even considered a possible escalation in the military conflicts around the globe.

As I said: the future is unknowable, but this is one of the worst setups I have seen in my career.

As I look back on the stocks we sold at the end of 2021 and the beginning of 2022 I am relieved to have provided some measure of protection for our clients from catastrophic losses in technology stocks, newly public story stocks, and European equities. The first rule of holes, as my grandfather used to say, is when you are in one quit digging. Not sure if that was marital advice or investment advice, but I’ve noticed it works as well with both.

Clients, you may have noticed high cash balances in your accounts this year. This was and is by design.

Stockbrokers advise clients to buy low and sell high, but I’ve noticed very few actually sell. When selling is discussed, most professional advisors and investors will say you can’t time the market. To be fair, most can’t. But when everyone believes something to be true, a contrarian is alert for an opportunity.

And there is little doubt that Wall Street has a buy and hold bias. According to FactSet, analyst's “buy” ratings outnumber “sell” ratings by a factor of 10:1!4 This begs the question, how can their clients buy low if they never sold high?

In the wise words of King Solomon, “there is a time for every activity under heaven… a time to keep and a time to throw away… a time to plant and a time to harvest.” Having harvested in Q1, we are patiently waiting for planting season.

Investing is subject to risks including loss of principal invested. No strategy can assure a profit against loss in periods of declining values. International investing involves special risks including greater economic and political instability, as well as currency fluctuation risks, which may be even greater in emerging markets.

Past performance cannot guarantee future results. Current performance may be lower or higher. Please note that individual situations can vary. Therefore, the information presented in this article should only be relied upon when coordinated with individual professional advice.