-The answer may surprise you-

December is normally a good month for stocks. According to FactSet, 75% of Decembers since 1950 have generated positive returns. Of all the months they studied, December was the most likely to be positive.

In fact, it is so common to see a year-end rally in stocks that it is known as the “Santa Clause Rally,” and the failure to realize this rally is taken as a negative omen. Traders warn “If Santa Clause should fail to call, bears may roam on Broad and Wall.”

As Adam Duritz of the Counting Crows wrote “It’s been a long December and there’s reason to believe maybe this year will be better than the last.” While we might disagree with this based on the full year’s prognosis, our research suggests some reasons for optimism for stock investors.

Stop me if you have heard this before, the stage may again be set for stocks to rally. Readers may recall that indices rose 9-15% after we made that call last October, our first bullish note since we turned bearish on stocks in early February of 2022. 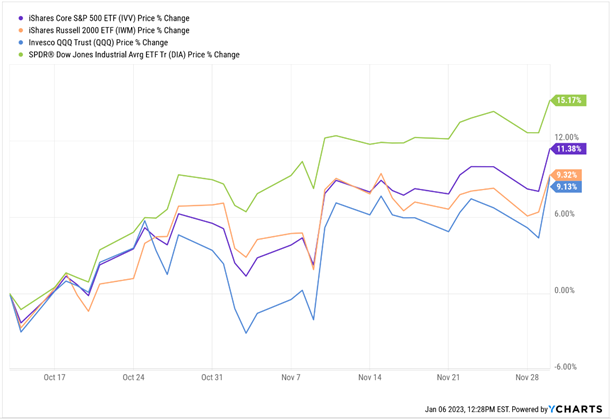 The October/November rally was sparked by oversold and fearful conditions in the market. Some of those catalysts have been removed, but a different phenomenon could spark a rally in January of 2023: tax-loss harvesting.* Many investors booked gains in 2022 and, as a result, were incentivized to sell their losers before year-end to offset their winners. Maybe this was what kept Santa at bay in December. After all, who would want to pay capital taxes in a year in which they lost money? With the flip of the calendar, that artificial selling pressure might abate.

*Note: We also observed complacency in the VIX term structure at the end of November. While stocks might have dropped due to tax loss selling in December, they might have also declined due to nascent investor optimism that the Bear Market was ending. We cautioned against this belief in October saying “While we would not be surprised at all to see the market move higher in the short-term, our experience tells us caution is still prudent in the longer term.”

Since January is for new year resolutions and fad diets, it is only fitting that we deem the best investment strategy for January 2023: The Biggest Loser.

Readers and clients know that we are big believers in momentum. Winners tend to keep winning, and losers tend to keep losing. However, rules are made to be broken, and this January might be one of those times.

We started our study by looking at every monthly return since 1926. Generally, it was best to buy a basket of stocks that had been recent winners (aka high momentum stocks), with Decembers being the second-best month for this group. But what about Januarys? In contrast to Decembers, Januarys were the best month for stocks that were recent losers (low momentum stocks).

In fact, winners outperformed losers by 2% in December, but losers outperformed winners by 1.5% in January. That’s quite a shift, and certainly interesting enough to keep digging.

We then narrowed our study to the Januarys following bear markets that occurred during prior mid-term election years. The results were pretty amazing. Not only did stocks tend to rise in January after a mid-term bear market, but the stocks that lost the most in the prior year tended to rise much faster than the previous year’s winners. I compare this to a beachball being held underwater. When the pressure holding it down is removed, it starts to rise, and rise fast. Large-cap losers beat large-cap winners 83% of the time by an average of 6%. Small-cap losers beat small-cap winners by 8%. In just a month!

Please know we began making changes to our discretionary accounts on December 30th, temporarily increasing/decreasing low/high momentum stock exposure. And don’t worry, we have not made wholesale changes. In fact, we hope all readers understand that a sample size of six is very small, and they should be careful putting too much faith in such a small study. However, as my statistics professor once said of the soft sciences, “This is not a drug trial. It is not life or death. If you think you have something, use it.” And we are.